Museum of the Restauration of the Republic 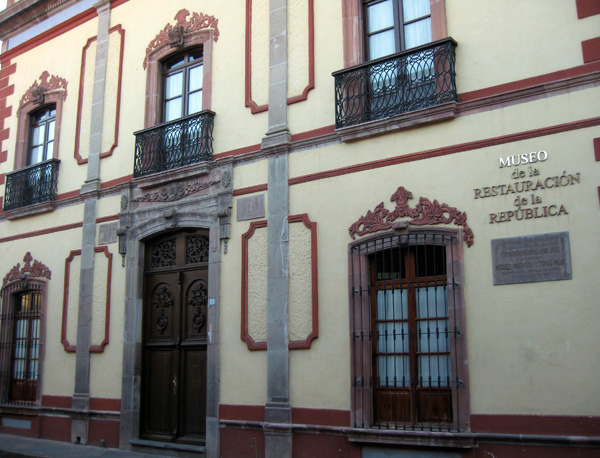 It is within the Capuchin Convent premises and was built during the second decade of the XVIII century. Throughout the years it was also used as barracks, the last prison of Maximilian of Habsburg, a house, a commercial academy and government offices. The construction that lodges the museum was expressly built on a design by Ignacio Mariano de las Casas, architect, and Jose Torres Vergara, BA. The construction was under the direction of the Department of Historical Sites and Monuments of the Ministry of Urban Development and Public Works in 2000; the museographic concept was elaborated by Manuel Oropeza. The museum opened its doors on August 14, 2003 as a touristic and cultural attraction where important aspects on the history of Queretaro and the country in general can be known. Among the pieces that are exhibited in its six permanent halls some of the most outstanding are the National Republican Coat of Arms of 1873, an oil portrait of Juan Caballero y Osio (XVIII century), a painting that alludes Maximilian’s surrender in the Campanas Hill (1945), the blue print of the City of Queretaro in 1796 and another oil portrait of Don Benito Juarez (1900).